In October of 2016, a 22 month old boy died after falling from a skid-steer loader.

In January of 2017, one man was killed and another seriously injured when the tractor they were repairing slipped into gear and ran over them.

In May of 2017, a 20 year old female intern at an Iowa grain co-op had her hair caught in a PTO.  Despite a 12-hour surgery, doctors were unable to reattach her hair and scalp.

These are just a few recent stories that will become part of Iowa’s farm injury and fatality statistics.  In 2016, according to the Central States Center for Agricultural Safety and Health at the University of Nebraska, there were 23 agriculturally related fatalities in Iowa.

Farms are hazardous workplaces.  Operators and their employees are regularly in contact with large equipment, livestock, chemicals, and electrical and fire hazards.  In addition, the extreme weather conditions, time constraints, and tight profit margins expose farmers and farm workers to numerous health and safety risks every day.

Injuries and deaths in agriculture are not only tragic, they are costly.  A recent report commissioned by I-CASH shows that the premature death of a primary farm operator can result in considerable loss of economic productivity.  It costs the local community in jobs and sales income that is no longer spent locally.  It also costs the state, with nearly $20,000 in reduced tax revenue. 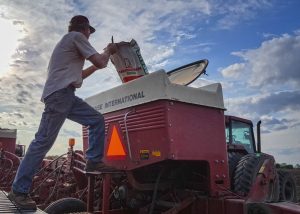 Farmers are the foundation of agriculture, and numerous other industries in Iowa rely on a healthy and safe agricultural workforce.  At I-CASH, we work to engage rural stakeholders across the state to protect the health and safety of our most important workers.

It is difficult to know the exact rate of occupationally related injuries in farming. Because most farms are small enough (employing fewer than 10 non-related workers) to remain outside of the reporting requirements of the Occupational Safety and Health Administration (OSHA) requirements, most farms have no way to report injuries that occur while working.  Because farms are also homes, where people may be injured while not working, it can be difficult to identify an injury that is specifically related to the farm occupation.  Some data can be drawn from state-level trauma systems, newspaper clippings, and fatality reports.   Ultimately, in most cases, agricultural injury and fatality rates are under reported.

What do we know about the rates of agricultural injury?

Nonfatal injuries are much more common than fatal injuries, but much more difficult to track in agriculture.  Recent surveillance research from the Great Plains Center for Agricultural Health found: